Consisting of a fun-filled 64km route (with 1400m ascent), Stage Two treated mountain bikers to some of W2W’s most iconic sections including: the Paul Cluver Amphi Bike Park with well-known MTB features such as Raka, Swing, Ark, Cobra (switch-backs), Mamba, Boomslang, Pofadder, Jakkels, Pine Singles (now with dual and cross-overs) and the Berms. The day’s action was closed off with the upgraded triple storeyed KROMCO-PERI Bike Park, which stands an impressive 6 – 8m above ground.

Team ACE Lesotho’s Phetetso Monese and Bruce Hughes continued their winning streak claiming their second stage victory in an impressive time of 02 hours 57 minutes 04 seconds. “I had fun today,” says Monese. “The route was really nice. We started with a bunch of six teams. I was worried that they’d make things tough for us, but we managed to breakaway. I enjoyed the bridges at Paul Cluver. I’m not used to riding bridges like that.”

“Today was so much fun,” says an elated Hughes. “We let the other teams pull from the start, while we pushed hard on the single track. We were still with the second team at Water Point Two. From there we opened the gap. Phetetso and I worked really well as a team. We’ll have a substantial lead going into Stage Three. We’ll focus on not doing anything silly and just enjoy the ride home.” Team KAP Prochorus’ Lorenzo Le Roux and Daniel Mannweiler came in second, while Team More Cowbell’s Graeme Dale Kuys and Darryn Stow finished third.

Riding for charity, Team Reeds Miles4Smiles’ Shaun Peters and Johan Louw are supporting Operation Smile South Africa. “Seeing my two children smile is priceless,” says Peters. “Being able to give back through the sport is an amazing opportunity for us. The FNB W2W is special because of the riders, the views and the vibe. Every time I struggled on route, Johan would remind me why we are taking part. Our team strength is our determination toward our cause.”

Team Haaskat’s Russell Lund and Anneke Hanekom also secured their second stage victory (in the mixed team category) with a deserving finishing time of 03 hours 23 minutes 29 seconds. According to Lund, the W2W is South Africa’s ‘must do’ event. “We started out a little too hard today. As a result we are more exhausted. It was a solid day though.”

“The KROMCO-PERI Bike Park was lots of fun,” says Hanekom. “It was nice and cool, just beautiful. My goal for Stage Three is not to be in as much pain as today.” Team Citricom 2’s Jeanie De Villiers and Piet Laubscher came in second, while Team Bike Hub’s Nicholas Webb and Kylie Hanekom finished third.

The action of the 2016 FNB W2W MTB Ride will culminate on Wednesday, 09 November 2016 at the Onrus Caravan Park (just outside Hermanus).

Family and friends wanting to show support on the final stage can download the Event’s Spectator Guide here: http://wines2whales.co.za/wp-content/uploads/2014/05/Spectator-Guide.png 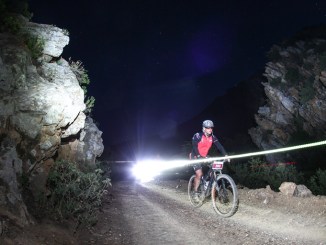 The 36ONE MTB Challenge Partners with Extreme Lights